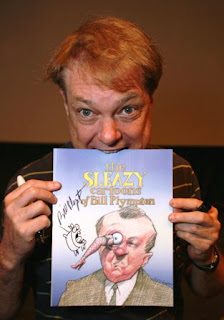 1) Bill Plympton
Bill Plympton attended Portland State University in 1964 before transferring to New Yorks School of Visual Arts in 1968. He first became aware of animation at the age of four or five, when he first saw Daffy Duck. He would religiously watch Walt Disney Presents every Sunday night and became a card carrying member of the Mickey Mouse Club. After graduating from college, the animation studio system was almost gone and very little opportunities in animation were available. He spent the next 15 years as a political and gag cartoonist, his work appearing in; The New York Times, Vogue, Rolling Stone, Vanity Fair, Penthouse and National Lampoon.
After a series of successful shorts, Plympton produced Your Face (1987), an Oscar nominated animation about a man in a chair crooning about the face of his lover. As he sings, his own face begins to distort in various different ways. 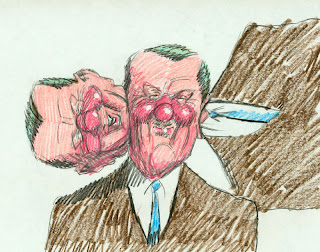 2) Your Face
Your Face launched Plympton's animation career and set his signature style of loose, sketchy drawings primarily coloured in pencil. It would also establish a running theme of ordinary, plain characters being exaggerated by the excesses of the things they do, or that happen to them. "Often character designers say because it is a cartoon, you have got to make a character 'goofy'; you have got to give him a big nose and big ears and bulging eyeballs and buck teeth, and I go totally the opposite way; I think that the character should be extremely bland; really normal; sort of non-descript in his characteristics because when something weird happens to him, when he's excited, or when he freaks out, there is a real contrast. And that's the secret of good animation - the movement between something that is sedate to something that is extreme". (Plympton quote. Wells. 2006:45)
This style continued with his other shorts How to Kiss (1989), and 25 Ways to Quit Smoking (1989). Both depicting average people doing normal things with humorous consequences. "Plympton's unique-style, in which he sees the sense of the ridiculous in everyday life...". "His animations are all done by hand, and he uses only four to six drawings per second, less than a Saturday-morning series. Disney style animation requires 12 to 24 drawings per second." (Beck 2004:278). 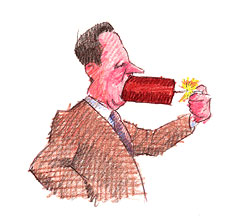 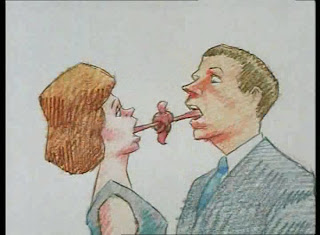 4) How to Kiss
In 1992, Plympton almost single handedly animated his first feature The Tune. The feature follows Del, a songwriter desperately trying to finish a song and deliver it to his unpleasant boss Mr. Mega. On the way to his office, Del gets lost and winds up in Flooby Nooby, along the way meeting a wiseman, and Elvis impersonating dog and a noseless cab driver. "If the basic story of "The Tune" is almost too simple to bother relating, Mr. Plympton, one of the country's most admired creators of animated shorts, has fleshed it out with a continually inventive and witty series of tangents. Animated with 30,000 ink and watercolor drawings, the movie effuses a jaunty surrealistic magic of a sort that the folks at Disney, with all their resources, have probably never even thought of." (Holden 1992.) 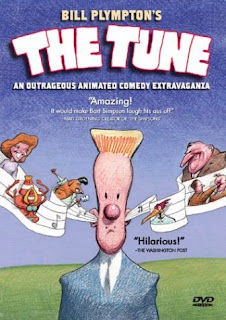 5) The Tune
Plympton continues to animate over a range of media, lending his unique style to Kanye Wests' music video "Heard 'Em Say" (2005) and "Weird Al" Yankovic's "Don't Download this Song" (2006), as well as shorts and feature length animations.
Bibliography