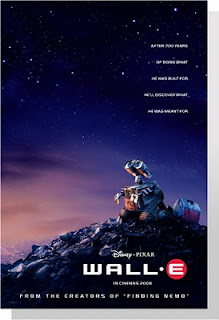 Plot summary / review:
700 years in the future, Earth has become a dusty wasteland, full of garbage and trash left behind by it's human inhabitants. The only organic life left is a cockroach, but something else is busy at work roaming the derelict streets. Wall-E, short for Waste Allocator Load Lifter - Earth-class, is the last remaining solar powered garbage collector made by the corporate company responsible for the mess, Buy 'N' Large Inc. 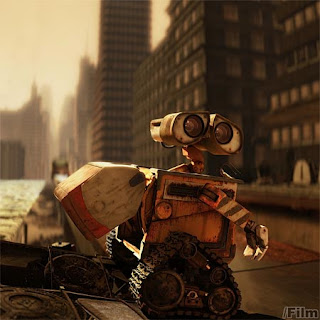 2) Cleaning Up
Working tirelessly day after day, Wall-E gathers the rubbish and compresses it into cubes in his "stomach". He neatly stacks them into towering skyscrapers, collecting interesting artefact's (including a rubix cube and lighters etc) along the way. "The heart of the film, and the source of its most inspired, bewitching scenes, is its first half hour. There's no dialogue, just a series of bleeps, whirrs and squeaks - like a cross between the Smash potato robots and a soundtrack hatched up by the BBC Radiophonic Workshop. WALL·E gently motors across a parched earth full of faded street signs and collapsed buildings, heat and pollution, rendering the atmosphere dust-caked and poisonous red."  (Sandhu. 2008).
700 years of work and isolation has had an affect on Wall-E's circuits. He's craves companionship and love to sustain his lonely existence. Every night he watches "Hello Dolly" on VHS tape and dreams of holding a loved ones hand. One day, when returning to his abode from work, a spaceship bursts through the atmosphere and leaves a sleek, Ipod inspired robot, EVE (Extraterrestial Vegetation Evaluator). Her mission is to scour the planet for signs of plant life, proving Earth is once again sustainable. Wall-E is captivated by EVE and humorously tries to pursue her. Fixated on her directive, EVE at first, ignores him and gets to work. Saving EVE from an dust storm, Wall-E takes her back to his makeshift home where EVE stumbles upon a plant Wall-E found amongst the rubble and keeps in an old shoe. 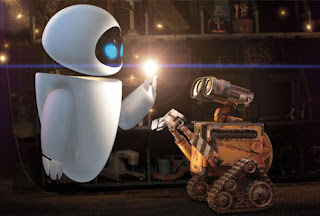 3) Wall-E and EVE
Discovering the vegetation, EVE's automatic system stores the plant in her stomach compartment and shuts her down to await pickup. Determined not to lose his new found love, Wall-E scrambles aboard the pickup ship in pursuit of EVE and is whisked into outer space. The ship takes them to the Axiom, a hotel like space ship, housing the evacuated humans. Over the years they have devolved into obese, baby-like characters dependent on technology. "...the clever whimsy begins to sour the moment the film scrambles on board the Axiom (the pompous name of the human space ark). Our metal heroes fall foul of a rogue computer with delusions of grandeur, and the story turns into a rather predictable robots-in-peril adventure." (Christopher. 2008). 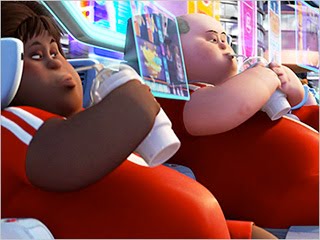 4) Devolved humans
This is not to say the weak third act is without it's moments. The ships co-pilot jettisons Wall-E and the plant to get rid of the evidence and keep the humans in space. Wall-E and EVE engage in a hypnotic, majestic space dance back to the ship that captivates the audience and the robots growing love. Combined with the great visual reach of the opening and middle act and huge family appeal , Wall-E is firmly up there in a growing list of Pixar classics. "WALL•E plays without safety nets or spoon-feeding; it reinvents the delicate, potent behavioral language of silent-film comedy, of the Buster Keaton and Charlie Chaplin films." (Corliss. 2008). 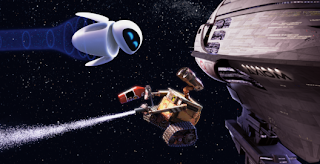