Some more research and some videos for inspiration. I was a huge fan of these guy's growing up. The memories:

And of course these guy's:
Not a cartoon but I really like the title sequence of this late 80's TV series:
Posted by Paul Lavey at 16:05 1 comment:

For our first lesson, we looked at various villains, heroes and sidekicks to ascertain their characteristics. We were then given pencils and papers and assigned two random words to get the creative juices flowing. I was assigned an EVIL KNIGHT: 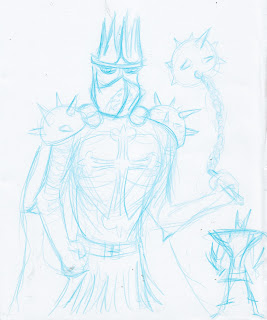 A few pointers from Justin and my second attempt faired a lot better.... 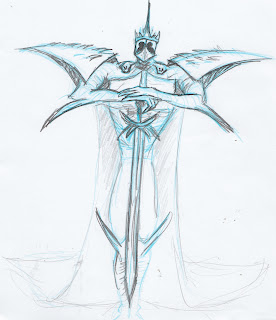 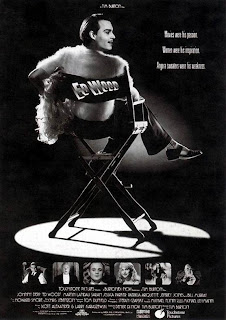 1) Ed Wood Poster
Plot Summary / Review﻿:
Tim Burton's film is a biopic about Edward D. Wood Jr, an eccentric Director in 1950's Hollywood, widely regarded as the worst Director in cinema history. The film depicts his struggle to make his early films, "Glen or Glenda", "Bride of the Monster" and "Plan 9 from Outer Space".

Burton opens the film with a homage to these movies with a trademark title sequence using a miniature set with grave stones informing the audience the stars of the film. Johnny Depp heads up the cast with a strong performance which no doubt laid the foundations for later, quirky roles such as "Willy Wonka" in Burton's remake of "Charlie and the Chocolate Factory" and "Captain Jack Sparrow" from the "Pirates of the Caribbean" saga. Janet Maslin of the New York Times reviews his performance at the time of release... "he gives a witty and captivating performance, bringing wonderful buoyancy to this crazy role. He captures all the can-do optimism that kept Ed Wood going, thanks to an extremely funny ability to look at the silver lining of any cloud." (Maslin 1994).


Ed Wood's first foray into feature film directing, leads him to "Screen Classics", a small studio specialising in sexploitation films. Ed meets the studio head and desperately tries to convince him that he is the right man to direct a proposed film about sex-change. The skill that makes him most qualified? Wood himself liked to cross dress. The meeting does not go to plan, however, a chance meeting with "Bela Lugosi", an out of work actor most famous for playing Dracula, spurs him on.


The heart of the film lies with the strange relationship that forms between Wood and Lugosi, brilliantly portrayed by Martin Landau. Wood's admiration for Lugosi is genuine, despite the fact he hasn't had a hit in years and is addicted to morphine. Wood uses Lugosi's former star status to convince the head of the studio to make his film, resulting in "Glen or Glenda". Wood himself starred as the lead, using the film to tell his girlfriend about his cross dressing activities. The film somehow is finished but never get's played locally or sold to major cinema's. Inevitably it flops. 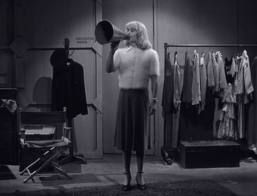 2)Ed in "Glen or Glenda"
Undetterred, Woods continues to seek out funding for other projects, along the way recruiting other oddballs including a pro wrestler, a vampire TV presenter and a clairvoyant. "When Wood assembled his casts, they looked like a cartoon portrait from Mad magazine." (Ebert 1994). Lugosi deteriorates becoming less Woods' headliner and more his patient and there is a strange feeling of endearment to learn his final performance was captured by Wood. Todd McCarthy writes "Giving the story its principal weight is the Wood-Lugosi relationship. Initially, the young director willingly pays the old star the obsequious homage the actor believes he deserves. But when Lugosi needs serious help with his addiction, Wood is the only one there for him, checking him into a clinic and, later, filming some footage that ended up as Lugosi's posthumous appearance in 'Plan 9'." (McCarthy 1994) 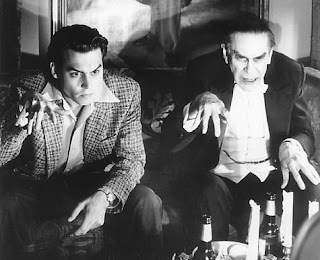 3) Ed and Bela
Ed Wood is an often funny film aimed at celebrating the work of the infamous Director. One of Burton's trademarks is to get the audience to root for the "alternate hero" and Ed Wood is no different. His direction skilfully portrays his love of kooky 1950's exploitation films but also tells us his view on business like nature of Hollywood. Janet Maslin explains this in a scene from the film that finds Wood meeting his idol, Orson Welles. Welle's tells Wood "… independence is everything and that an artist's visions are worth fighting for."  Mr. Burton, currently Hollywood's most irrepressible maverick, has taken that credo to heart." (Maslin 1994)
Bibliography
Ebert, Roger Sunday Time  review. Oct 7th 1994
http://rogerebert.suntimes.com/apps/pbcs.dll/article?AID=/19941007/REVIEWS/410070301
McCarthy, Todd. Variety.com film review Sep. 6th 1994
http://www.variety.com/review/VE1117903075?refcatid=31
Maslin, Janet. New York Times review Sep 23rd 1994
http://movies.nytimes.com/movie/review