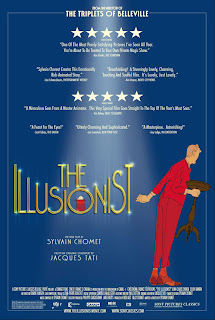 Based on an un-produced script by Jacques Tati, Director Sylvain Chomet had to beg Tati's extended family for permission to adapt it into his 2010 release The Illusionist. Chomet based the main character Monsieur Tatischeff on Jacques Tati himself and relocated the story to Britain. "The result is utterly distinctive and beguiling, with its own language and grammar of innocence: gentle, affectionate, whimsical, but deeply felt and with an arrowhead of emotional pain." (Bradshaw. 2010).


In the 1950's, Monsieur Tatischeff is a dying breed of entertainer. Moving around France and performing exquisite, but antique magic tricks, he is struggling for work. His audience is increasingly consisting of screaming girls only there to see cheesy rock bands. "He’s a good magician on a small scale, flawless at every trick, except producing a rabbit from a hat." (Ebert. 2011). 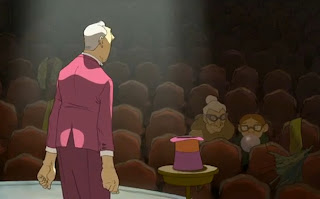 2) Dying audience
In the pursuit of work, Tatischeff travels to Britain to perform on any stage he can. He works his way up to the Scottish Isles, reduced to performing in a Pub for local people celebrating the fact they have just got electricity. A cleaning girl at the pub called Alice is mystified by his magic tricks, and through an act of kindness, Tatischeff buys her a new pair shoes. He extravagantly presents them to her with slight of hand, Alice becomes convinced he can magic anything she wants into existence. So much so that she follows him to Edinburgh, stowing away on his ferry trip.
The pair form an unlikely companionship, checking into a hotel frequented by fading circus acts. Tattischeff continues to perform locally, while Alice upkeeps the room. It is here that the movie begins to take it's stride, replicating Edinburgh lovingly down to the minutest detail . "Every frame looks like a delicate water-colour - the city’s buildings, alleyways, hills, spectacular views - even its 1950s buses - are realised in gorgeous detail." (Gritten. 2010).  The images are so enthralling the audience falls in love with town's splendor with the characters. 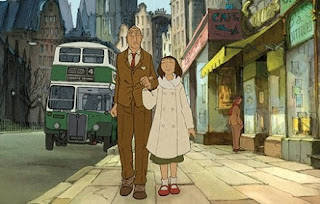 3) Tattischeff, Alice and Edinburgh
Keeping up the illusion for Alice, Tattischeff continues to surprise her with new gifts, stretching him financially. However as they both mature and the illusion begins to fade, Tattischeff reaches the lowest of the low, performing in a shop window to advertise it's products. As Alice's attentions are elsewhere with her new love interest, he realizes he has become truly obsolete. Emotionally,  he sets free his co-star rabbit into the Scottish highlands, seamlessly blended 3D and 2D animation. "...when Chomet's animated "camera" takes off for a swirling, overhead shot of a lovingly realized Edinburgh, the effect is dashing, breathtaking, even weirdly moving.  (Bradshaw. 2010).  He leaves Alice with a poignant message and flowers in the hotel room, stating "Magicians do not exist.". On the train out of Edinburgh, Tattischeff tantalizingly looks at a photo of a likely child relative, possibly a metaphor of Jacque Tati's own personal family life. 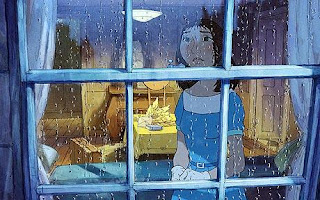