I have been commissioned to produce 3 fully-resolved concept paintings for the new CG animated adaptation of  Henry R. Haggard's "She:  A History of Adventure". 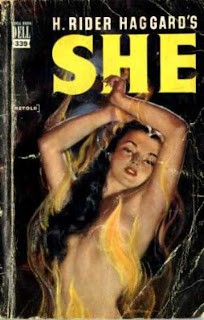 Book Summary
The novel is about Horace Holly, a Cambridge professor and his ward Leo Vincey and their travels to inner Africa in search of an Ancient ruined city called Kor. On their travels they encounter a primitive culture called the Amahagger, who are ruled by a mysterious white sorceress called "Hiya" or She who must be obeyed.
Thousands of years ago, Hiya (or Ayesha as she becomes known to Horace), discovered a pillar of fire deep in the Earth which granted her eternal youth and God like powers. She was in love with a man called Kallikrates who, unfortunately, was in love with an Egyptian women called Amenartas. When Kallikrates rejects her in favour of Amenartas, she kills him in a jealous rage.
Ayesha believes Leo Vincey to be the reincarnation of Kallikrates, whom she has been waiting for over the past two millennia. She takes Horace and Leo through the Ancient city of Kor to make him walk through the pillar of fire so that they may be together forever.
Initial Research 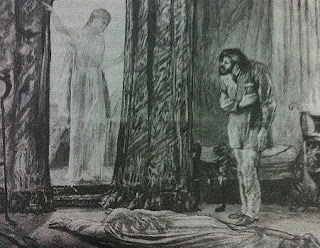 Illustration from the Graphic (1886). Holly first looks upon the figure of She, while Billali lies prostrate on the floor fearing to look up. 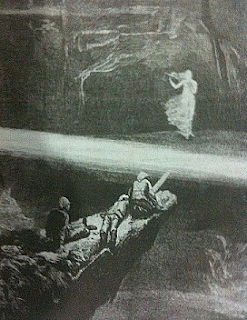 Illustration 12 from the Graphic magazine serialisation of She. The picture is of a scene in the caverns, as Ayesha leads the three Englishmen to the Spirit of Life 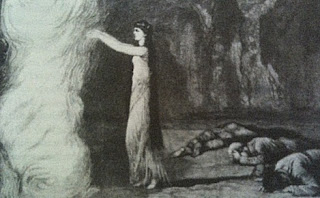 Illustration by E. K. Johnson for the Graphic(1887). Ayesha about to enter the Pillar of Fire, with Holly, Leo, and Job dumbstruck in fear.
Posted by Paul Lavey at 23:26