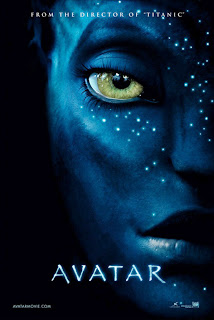 Plot summary / review:
The year is 2148 and the movie opens with it's protagonist, Jake Sully (Sam Worthington), a paraplegic ex-marine in a neo-noir vision of an overcrowded, polluted city on Earth. In a technologically advanced future where spinal damage can be fixed, the world is still driven by money and business but Jake soldiers on, looking for a worthy cause to fight for. Before long he is approached by men in suits who inform him of his twin brothers murder, but offer him a unique opportunity. 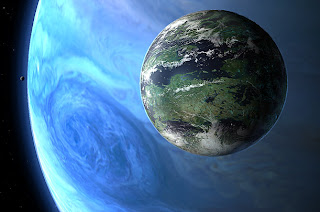 Jake is recruited by a corporate entity who are mining a precious mineral called "Unobtanium" from a planet like moon deep in space. After a six year, hibernated space journey, Jake arrives at the planet, Pandora. Jakes brother was part of a team of scientist hired to research into the planets inhabitants called the Na'vi who happen to be in the way of the companies objective. To work amongst the Na'vi, humans use remote controlled bodies grown from the DNA of the natives and mixed with human DNA. As Jake has the same genetic make up as his brother, he is able to use his Avatar. The company has also hired ex-marines and mercenaries as security and see's an opportunity to gain valuable 'intel' via Jake. 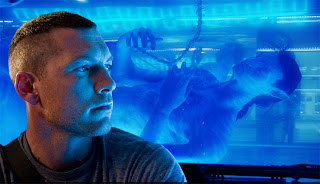 As Jake gets used to his new body, we really begin to explore the planet of Pandora. James Cameron has crafted an exotic, alien looking World but equally a familiar one with hints of Earth like jungles and mountains pushed to the limits of reality but still believable and awe inspiring. The level of thought and imagination that went into the design of the planet stretches through the entire planet from the strange plants and wildlife and a range of insects, alien monkeys to gigantic monsters. Jake gets separated from his team of scientists from a run in with one of these beasts and meets a native called Ney'tiri (Zoe Saldana). She believes Jakes arrival will play a significant role to her peoples future.
Andy Lowe
Total Film review 11th December 2009
"As Jake dives in and out of his split human/alien personalities, Cameron is equally urging us to leave our burdened minds and busy bodies behind - to sink into our seats and immerse in a virtual world." 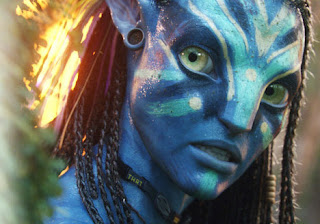 Ney'tiri is ordered by her father and tribe leader to teach Jake the ways of the Na'vi, whilst he receives orders from Colonol Miles Quaritch (Stephen Lang) to gain access to their world and convince them to leave their beloved "Hometree", unfortunately where the biggest site of Unobtanium resides. Jake becomes more and more attached to the Na'vi way of life, going through their rights of passage, exploring the mystical floating mountains (floating as a result of the Unobtanium) learning to fly with a declan ( a mountain banshee)  and falling in love with Ney'tiri.
Chris Tookey
Daily Mail review 28th December 2009
"The planet Pandora is worth a visit to the cinema, with its day-glo colours and gigantic monsters. You can tell that Cameron has a passion for deep-sea diving; the world he creates has the appeal of an underwater kingdom." 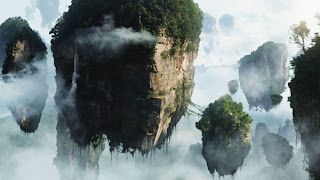 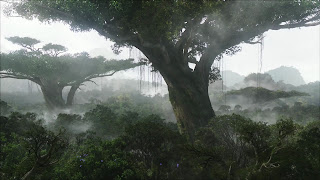 Inevitably the company decides to forcibly remove the Na'vi from their home and Jake decides to fight with the Na'vi against the encroaching military wing. He learns the planet itself has a soul called Eywa, ( a more interactive mother nature ), after leading the Na'vi to victory over the "sky people", he is accepted into their tribe and Eywa enables him to permanently reside in his Avatar body. 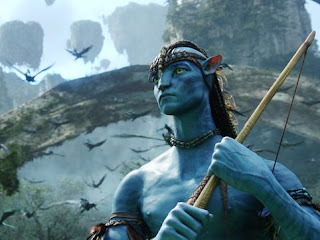 After a long absence from the movie industry, James Cameron has returned to cinema with a highly imaginative, visually stunning, fluorescent bang. It is full of not so subtle metaphorical parodies, for example the war in Iraq and the motivations behind it, humanities thirst for natural resources, Unobtanium the futures equivalent of Oil, but this used to craft a believable world. Yes the story has familiar arc in comparison to Disney's Pocahontas and Dances with Wolves, but the visual language and the way it is told seal it as a modern classic. The 3D adds to the spectacle and is leaps and bounds ahead of other gimmicky, blue and red tinged 3D films of the past. However, this isn't to say the 2D version is no less enjoyable, Pandora is worth a visit anytime, 3D glasses or not.
Manohla Dargis
New York Times review 18th December 2009
"Few films return us to the lost world of our first cinematic experiences, to that magical moment when movies really were bigger than life (instead of iPhone size), if only because we were children. Movies rarely carry us away, few even try. They entertain and instruct and sometimes enlighten. Some attempt to overwhelm us, but their efforts are usually a matter of volume. What’s often missing is awe, something Mr. Cameron has, after an absence from Hollywood, returned to the screen with a vengeance. He hasn’t changed cinema, but with blue people and pink blooms he has confirmed its wonder."
Posted by Paul Lavey at 23:18