I have done a few more thumbnails in preparation for our second week workshop with photoshop Phil. 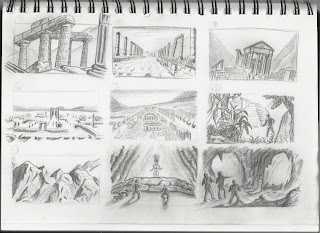 Continuing with the ancient ruined city of Kor, I wanted to produce some thumbnails from a street level perspective, as if we are walking through the city. The top three images are some studies of the columns mentioned, still mostly intact. The middle three images I reverted back to a more general overview of the city. A key part of the books describes miles upon miles of columns, temples and towers so I really need to nail the perspective to achieve this look. The very middle image I tried the horizon line and a slight angle. Back at street level, the parts of the city which were once gardens are now overgrown jungle, so I wanted a shot as if we were looking through the jungle at one of the explorers. A rough sketch of volcanic looking mountains. The last two sketches are inspired by the scenes where Ayesha takes Horace, Leo and their servant to the underground pillar of fire. So I tried to go for a cave look.
Photoshop Workshop week 7
Another work in progress which I will come back to. Again started off by blocking out a basic foreground shape. 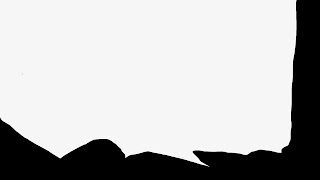 Then added a lighter tone mid-ground. 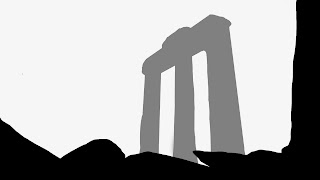 Another mid-ground layer which I duplicated, flipped and use the free transform tool to add another block of temples. 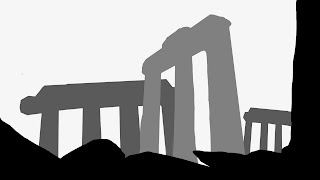 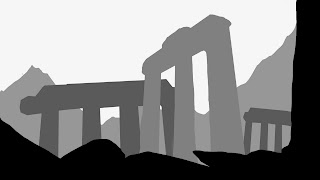 Grayscale background with gradient added to mountain and background for a bit of atmosphere. 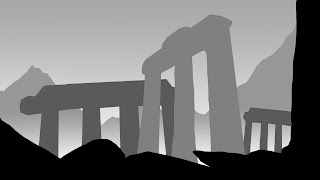 Started to add some detail into the pillars and blocks. 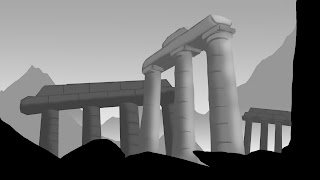