So here are some rough thumbnail sketches I did after my first read through of the passages from "She: A History of Adventure". The first two are initial ideas on the dried up lake or river bed. The third is an initial sketch of the approach to Kor, surrounded by a wall and moat. The fourth is after they have scaled the wall and are looking into Kor. The fifth and sixth are inside the temple where they are looking at the statue of the veiled wing lady of truth. More to come! 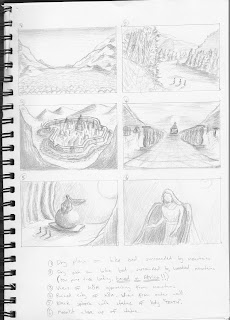 Working from the fourth sketch, I tried to translate it into photoshop. Inspired from page 315 of She: "There, all bathed in the red glow of the sinking sun, were miles upon miles of ruins - columns, temples, shrines, and the palaces of kings, varied patches of green bush. Of course, the roofs of these buildings had long since fallen into decay and vanished, but owing to the extreme massiveness of the style of building, and to the hardness  and durability of the rock employed, most of the party walls and great columns still remained standing."
Here's the first few steps of a work in progress: 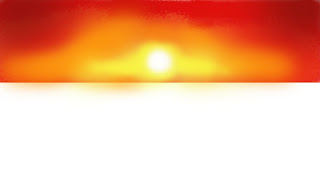 Started with a definite horizon line and used air brush to shape a red sinking sun. 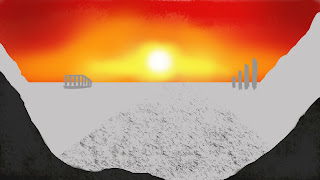 Added a mid and foreground, darker colours at the front to give a sense of depth. Started to add some buildings. 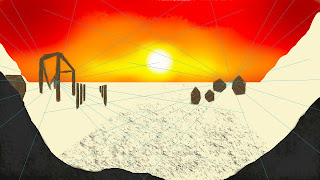 Under Phil's tuition, he showed me how to add perspective lines to use as guidelines when marking out the various columns and buildings. 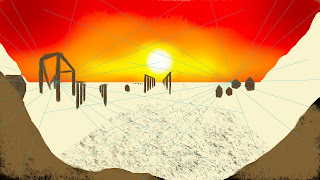 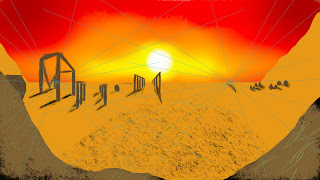 Played around with the colours and tried adding some shadows but unfortunately ran out of time. I am just testing and playing around at the moment and trying to absorb the techniques Phil is showing us, but not putting this one to bed just yet.
Posted by Paul Lavey at 01:40