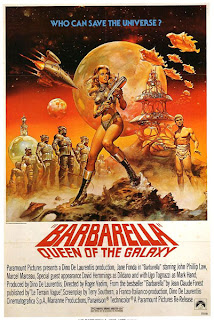 Plot summary / review:
Set in the distant future, astronaut Barbarella (Jane Fonda) is sent on a mission to track down a young scientist, Duran Duran (Milo O'shea) and retrieve a weapon which threatens the entire galaxy. 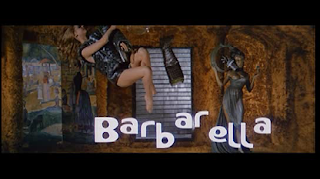 On her way to the city of Sogo, she "befriends" Pygar (John Phillip Law), a blind angel who accompanies her on her travels into the city. The city is ruled by a lesbian Queen who sleeps in a chamber able to make her fantasies a reality. The city is rife with sexual machines, torture chambers and drug dens where women smoke men's essence while they swim in giant hookah's.

After more revealing torture scenes, Barbarella meets Dildano (David Hemmings), the leader of a rebellion against the queen. After a curious plot with an invisible key, the city concierge is revealed to be Duran Duran who inadvertenly destroys the city with his weapon trying to kill the rebellion. Barbarella and the queen are fortunately saved by Pygar.

Barbarella is a strange mix of Sci-fi, fantasy and even pornography, but none the less one that is hard to look away from. It is important to put the film in context of the time it was made. The costumes reflecting the fact that the late 60's brought colourful clothes and women first started to wear mini-skirts, fake eyelashes and leatherboots.

The sets and studio design obviously had a big budget, ranging from leopard skin spaceship interiors, icy planet landscapes and the aforementioned sex and drug rooms of the city of Sogo, some of the time made to good affect, but predominately meager and tatty looking. 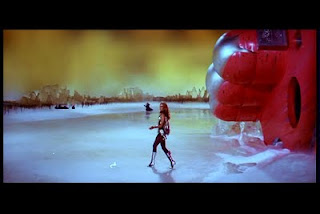 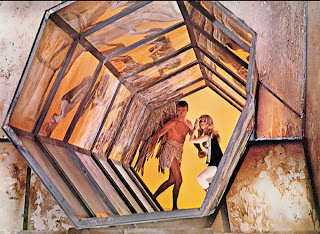 Almar Haflidason
BBC Review 1st January 2000
"A nutty film that boasts at times beautiful photography of some cheap but truly epic sets of PVC and everything that clings."

The movie is unashamedly sexist towards women with a very relaxed view towards sex. The 60's brought the pill, radically changing views on contraception. The movie suggests that sex in the future comes in the form of a different kind of pill which enables intercourse through telepathic means. This is quickly forgotton when Barbarella experiences sex via "traditional" means, a subtle metaphor of the times.


"Women have been treated very strangely in movies lately from the ancient biddy rapists with sticky, sandy eyes in "The Producers," through Doris Day mocked, all the actresses oddly cast and photographed from unattractive angles, to Barbarella, bruised and chewed about. Maybe it is an anti-Mummy reflex, no good, decent women on the screen. It is as though the medium, particularly in mechanistic science fiction and pseudo boffo bachelor comedy, has grown to hate them."


The 60's was mixed decade in terms of human progress. America was in the midst of the Vietnam war, racial tensions boiled, Presidents and civil rights leaders were assassinated so the film offered a break from reality. At the same time it developed upon other current trends, the laser was invented and mans greatest achievement of landing on the moon.
Posted by Paul Lavey at 01:02