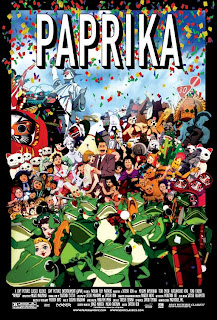 1. Paprika - Poster
Plot Summary / review:
Described as "a leading figure in the world of anime" (Cavalier. 2011:361), Satoshi Kon wrote and directed complex and cerebral movies. His most famous works Perfect Blue (1998), Millenium Actress (2001) and Tokyo Godfathers (2003) "used his trademark technique of segueing seamlessly between the reality of characters' lives and their memories, fantasies, dreams, and illusory worlds." (Cavalier. 2011:361). Paprika follows suit and was his last feature film before tragically dying of pancreatic cancer in August 2010.
Set in the near future, therapist Chiba Atsuko uses technology to enter her patients minds and record their dreams and fantasies. Under the guise of her avatar "Paprika", she explores and studies their psyches in an attempt to treat them. However, one day the technology is stolen and used to enter peoples minds when they are awake. Chaos ensues as peoples dreams and fantasies merge with reality. Atsuko and her colleagues are joined by one of her patients, Konakawa (a troubled detective) and go in search of the stolen technology and the perpetrator. 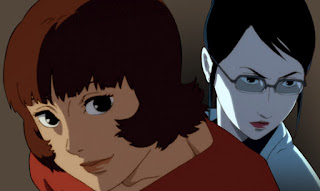 2. Paprika / Atsuko
The character animation in Paprika is a step back when compared with Katsuhiro Otomo's technical accomplishments in fluid movement and lip syncing achieved with Akira (1988). Perhaps due to budget or time constraints, the characters movements are frequently cycled. Scenes with extended dialogue often finds the characters frozen whilst only their mouths and eyes are animated. However, Kon more than makes up for this with the world they inhabit, seamlessly blending 2D and CG imagery. Leslie Felperin of Variety magazine reiterates, stating; "it looks pretty much par for the Japanese animation course, with simply drawn but expressive moving figures mixed with CGI-enhanced camera moves and richly rendered backgrounds, especially for the sequences featuring the eerie, confetti-strewn toy parade of invading dreams." (Felperin. 2004). 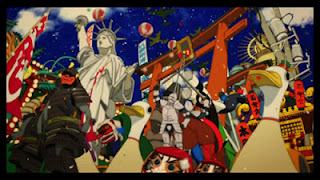 3. Invading dreams
Kon rarely used CG in his previous features, it is however used to great affect in Paprika. The world and environments he created gleam with both gritty realism and Dali-esque surrealism, perfectly complimenting his reality / fantasy blurred narrative. Kon takes this concept further, multi-layering Paprika with nods and references to his previous work and other popular cinema icons. At the films outset, Detective Konakawa's dream passes through multiple genres from fantasy to noir. Eagle-eyed viewers will also notice Kon actually places himself as a character with-in the movie. With so many references and innuendo's it can be argued that Paprika is the Directors love letter to the movie industry. 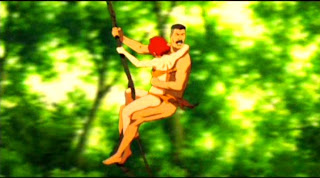 4. Movie references
Paprika is "a Freudian-Jungian-Felliniesque sci-fi thriller, and an outright challenge to American viewers, who may, in the face of its whirligig complexity, feel almost pea-brained". (Denby. 2007). Although the average movie goer might be lost to the multi layered references and in house nods, very few will not enjoy the unpredictable journey through Kon's vivid imagination. Although brave, innovative and exhilarating, Paprika is not regarded as his best work. However, just like one of the protagonists who buys a cinema ticket at the end of the film, those who take a chance with Paprika will certainly be entertained.