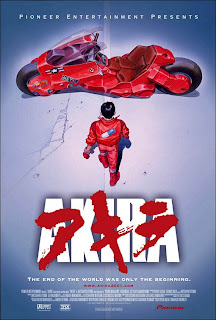 1. Akira Poster
Plot summary / review:
Adapted from his own manga series of the same name, Katsuhiro Otomo's "Akira" is a landmark in Japanese animation and filmmaking. A brutal alternative to the works of Disney, Otomo's feature length animation is a reflection of a culture that has survived nuclear fallout.
Set in 2019, Neo-Tokyo has risen from the ashes of World War 3. Ruled by corrupt politicians and a powerful military leader, the city is writhe with violence from underground terrorist groups to teenage biker gangs. The post-apocalyptic world they inhabit is beautifully rendered. At the time of release, Janet Maslin of the New York Times notes, "Mr. Otomo invests this dark flowering of post-nuclear civilization with a clean, mean beauty. The drawings of Neo-Tokyo by night are so intricately detailed that all the individual windows of huge skyscrapers appear distinct." (Maslin. 1990). Otomo animates separate layers of the city at different rates, simulating a camera panning across a vast environment adding depth, perspective and realism.

2. Neo-Tokyo
Biker gang the "Capsules", lead by Kaneda and his long term friend Tetsuo, race through the streets defending their turf from rival gang the "Clowns." A chance encounter with Takeshi (a telekinetic child with a decrepit appearance), leaves Tetsuo hospitalized and the rest of his crew in handcuffs. 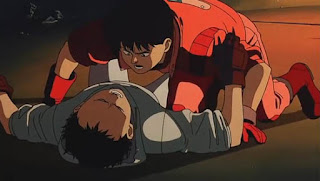 3. Kaneda attends to the injured Tetsuo
Colonel Shikishima and irresponsible scientist Doctor Onishi discover Tetsuo has similar powers to a deity called "Akira", believed to be the cause of the nuclear fallout 31 years ago. It is revealed Shikishima and Onishi have been experimenting on children with telekinetic abilities in an attempt to harness their power. They plan to continue their research on Tetsuo, who is struggling to control his new found abilities.
Meanwhile, Kaneda becomes embroiled with Kei, a beautiful girl involved with anti-government activists intent on uncovering the truth about Akira. Kaneda helps them infiltrate the building holding Tetsuo, Takeshi and two other psychic children Kiyoko and Masaru. Tetsuo's unstable new power, coupled with his fierce nature stemming from a life of rejection and bullying begin to take its toll. He violently escapes from his captors and rampages through the city. Pursued by the Government, terrorists, psychics and former friends, Tetsuo seeks to confront Akira, whose in cryogenic suspension beneath the new Olympic Stadium. Tetsuo unearths his remains for an epic final showdown that includes body-horror images enough to make David Cronenberg squirm. 4. Rampaging Tetsuo
Otomo's masterpiece was reversed engineered, starting with conceiving the end of the film first. His Manga series officially ended in 1990, two years after the anime release. By writing the end of the film first, Otomo was able to figure out which Manga elements would make the cut of the film without making it too lengthy.
It's running time however is still over two hours, unusual and ambitious for an animated feature. To realize Otomo's epic vision took the combined effort of numerous Japanese entertainment companies. As a result they produced realistic motion and for the first time in a Japanese anime, lip-synced dialogue. Phelim O'Neil of the Guardian newspaper states it's "Style and substance run neck and neck in this thrilling, bold landmark film that just refuses to become dated." (O'Neil. 2011).
Otomo's "Akira" raised the bar for sci-fi storytelling not only in animation, but all feature film. It also highlights many misconceived perceptions of Manga as Kim Newman of Empire magazine explains. "For anyone who thinks manga is all about incomprehensible storylines, naked girls with no pubic hair and a myriad of monsters that invariably turn into giant penises, this will set you straight." (Newman. 2008).