Infected by HIV - My understanding@Phil and Peter

HIV (Human Immunodeficiency Virus) can be contracted in three ways:

These pictures are from Dr. Klappa's lecture and are simple diagrams of the HIV cell itself. 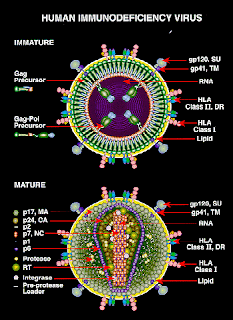 Question @PETER - Does the HIV cell 'mature' when it has infected the cell? 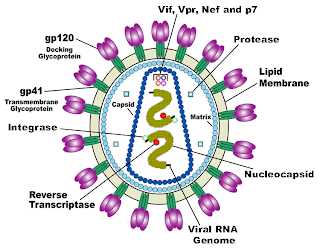 I will research deeper into this process, as I understand it at the moment, HIV infects cells in the immune and central nervous system's. One of the main cells it infects is the 'T helper lymphocyte', a cell that coordinates the actions of other immune system cells. Question @Peter - are 'T helpers' white blood cells and do you want the animation to be a process of one of these being infected?

I believe the above image is a diagram of a 'T helper' being infected because the cell membrane has CD4 receptor's on it's membrane. HIV attaches to the CD4 receptor and gains entry. Question @Peter﻿ - does the HIV cell actually penetrate the cell membrane? I seem to remember you saying that it doesn't but I maybe mistaken?
A healthy cell reproduces itself in it's cell nucleus, which contains the DNA (double stranded 4 bases A, C, T, G). Through a process called 'transcription' the DNA is broken down into RNA (single stranded 4 bases A, C, U, G). RNA is then broken down through a process called 'translation' into protein called amino acids (the basic building blocks of life).
HIV uses 'reverse transcription', synthesizing RNA into viral DNA. Viral DNA then integrates into the cell genome in the nucleus. The cell begins the cycle (viral transcription & translation); virus DNA creates virus RNA creates virus PROTEIN. The resulting amino acids (protein) reconstructs new HIV cells. These new cells go onto infect other cells and the process is repeated.
HIV infection eventually leads to a severe reduction in 'T helper' cells available to help fight disease. A CD4 test (or CD4 count) is used to measure the number of T helper's in the carriers blood. When the count decreases to a critical level, the individual is said to have progressed to AIDS (Acquired Immune Deficiency Syndrome) and is susceptible to infections and cancers.
The process of HIV infection can be broken down into four stages:
Stage 1 is the subject of my animation so my next post will revolve around story ideas / narratives along with more research images in response to Peter's answers to my questions.
Posted by Paul Lavey at 02:12