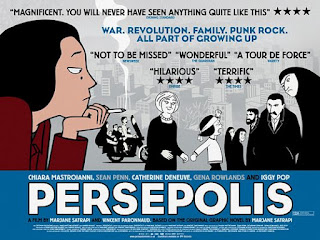 1. Persepolis poster
Plot summary / review:
Persepolis is an autobiography based on Marjane Satrapi's graphic novel, who co-writes and directs with Vincent Paronnaud. It's not a direct frame-by-frame recreation of the original books,  Satrapi and Paronnaud use the animated format to recast certain scenes and expand them into different directions. The result is a film that manages to stand alone in it's own medium whilst remaining faithful to its source material.
It tells the story of young, outspoken Marjane, an Iranian girl growing up in the 1970's during the Islamic revolution. Marjane is a feisty but vulnerable character with a unbiased love of Western trash culture. Her doting family ceaselessly campaign against the Shah, some of whom endure harassment and even imprisonment. Her secular family welcome the revolution when it finally arrives regardless of the overenthusiastic Theocrats patrolling the streets. Anna Smith of the BBC notes "Despite dealing with adult themes such as interrogation, imprisonment, drugs and sexual awakenings, there's a delightfully childlike element to Persepolis." (Smith. 2008). 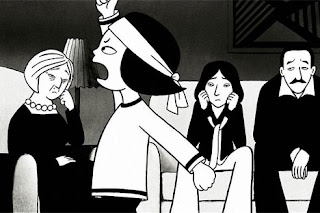 2. Young Marjane and her family
The animation and visual style submerges the audience in Marjanes childlike view of the world but does not sugar coat it. "The style is deliberately two-dimensional, avoiding the illusion of depth in current animation. This approach may sound spartan, but it is surprisingly involving, wrapping us in this autobiography that distills an epoch into a young women's life." (Ebert. 2008). As Marjane grows into a teenager, the society she thought she lived in has disappeared. After nearly being arrested for wearing make-up, her family reluctantly send her to Europe to live with friends. 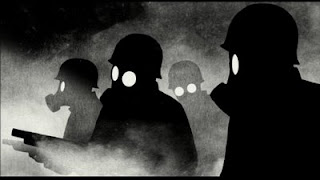 3. Hostile environment
Marjane's time in Europe becomes chaotic. Surrounded by a vastly different society full of casual sex and drugs, her suppressed raged is triggered and she loses herself. Homesick and disgusted with herself she is left with a dilemma; return home and lose her individuality, or stay and give up her home. She returns to Iran and discovers it is even more hostile than she remembers. The home she grew up in no longer exists. 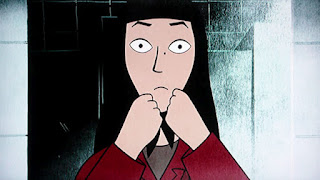 4. Grown up Marjane
Persepolis "is one of those rare things in the cinema: a movie with an urgent new story to tell and an urgent new way of telling it." (Bradshaw. 2005). It's an emotionally hard hitting, deeply personal, often very funny coming of age story that's far more interesting than its Western counterparts. It's visual style and engaging narrative make it's political message easy to swallow whilst remaining easily identifiable to a range of audiences.