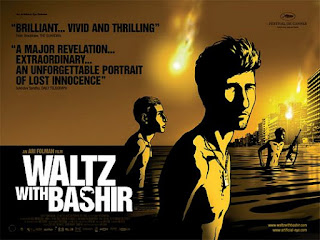 1. Waltz with Bashir - Poster
Plot summary / review:
"Animation will always be identified, no doubt, with funny animals, but is winning respect as a medium for serious subjects." (Ebert. 2009). Waltz with Bashir is a striking, poignant example of animated films ability to transcend this myth. Structured like a conventional documentary, the film follows Ari Folman (writer and director) as he tries to piece together memories of the Lebanese civil war in the Eighties.
It's unforgettable opening drops the audience in the middle of an intense nightmare - 26  rampant dogs racing through the streets tormenting the dreamer, one of Folman's Israeli army friends. Now middle aged, the compatriots discuss the dream over a drink in a bar. They determine that it is somehow related to their involvement in the war. Subsequently, Folman realises he has very little memory of that period in his life and sets off to discover the truth. 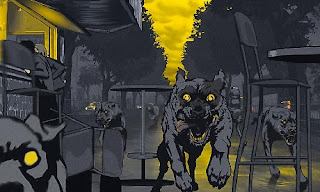 2. Nightmare
Folman travels the World interviewing old comrades, asking them to recollect events from the war in the hope it will trigger his own memories. As Folman (and the audience) re-live their experience, it becomes clear why the director chose animation as the medium to tell his story. "Planes and surfaces stir and throb with colours harder, sharper, brighter than before. It looks like one long hallucination, and therefore perfect for the trauma of Folman's recovered memories." (Bradshaw. 2008). 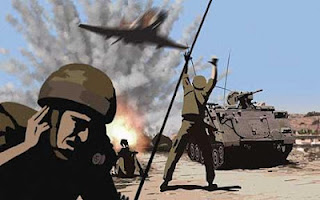 3. Vivid, surreal memories
The stories and memories Folman documents vary in intensity. One remembers being transported on a marine boat, fantasising about a giant naked lady taking him away while his colleagues are killed. Another recollects his miraculous escape from an ambush by swimming out to sea. He's riddled with guilt when he rejoins his unit fearing they believe he deserted his team. Each episode has a distinctive style. An accomplished artist, Folman uses a blend of 3D and 2D animation to describe their stories. "His animator's pen magics up the wartime events recollected by his fellows into surreal, searing visions makes vivid his recognition that, 'Memory is dynamic – it's alive". (Horne. 2009).
Folman's bold, emotional exploration of memory is a horrific insight into the effects of war. As he pieces together his puzzle, he gradually creeps towards the subject of the Sabra and Shatila massacre; the annihilation of thousands of Palestinian and Lebanese civilians. Folman does not clearly establish his level of involvement. Did he take part or merely witness it? Further questions are raised and not answered. Who knew what was happening? Could more have been done to stop it? The confusion certifies the fog of war. Folman's docu-autobiography is a psychological, politically charged investigation that suggests not all of the guilt has been suppressed. "But its greatest force lies in Folman's harrowing, poetic quest for understanding." (Horne. 2009). 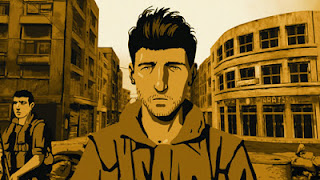