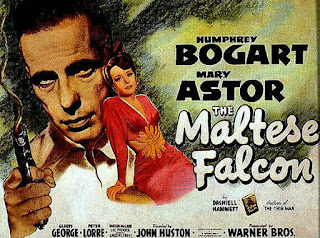 1) The Maltese Falcon Poster
Plot summary / review:
The Maltese Falcon is based on Dashiell Hammet's classic detective novel and was Warner Bros' third attempt to bring it to the silver screen. Making his directorial debut, screenwriter John Huston stayed true to Hammet's novel by making it gritty, mysterious and chilling. Combined with stylish cinematography, editing and stark lighting it is widely considered to be the first film noir, laying the foundations for the genre. Derek Adam's of Timeout confirms this in his review stating "What makes it a prototype film noir is the vein of unease missing from the two earlier versions of Hammett's novel." (Adam's. 2006)
As well as defining the rules for all subsequent noir films, it also launched the career of it's protagonist Humphrey Bogart. His portrayal of Sam Spade, an unsentimental, hard edged detective defined his career and led to his other classics roles in "Casablanca" (1942) and "The Treasure of the Sierra Madre" (1948). Roger Ebert of the Chicago Sun-Times examines his character stating; "he does his job according to the rules he lives by", he goes on to say "we sense (as we always would with Bogart after this role) that the toughness conceals old wounds and broken dreams." (Ebert. 2001). 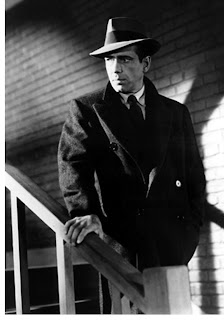 2) Humphrey Bogart as Sam Spade
The movie opens in Spade's office where he is approached by "knock-out" dame Miss. Wanderley, played by Mary Astor. She offers him and his partner Miles Archer (Jerome Cowan), a substantial amount of money to follow a man called Floyd Thursby. That night Archer and Thursby are murdered and Spade is implicated as a suspect. The plot thickens as Spade discovers that Miss. Wanderley is not who she says she is. It is revealed that she is embroiled with a host of dangerous characters, including Sydney Greenstreet in his first acting role as Kasper Gutman aka the "fatman." Spade eventually discovers that they are all in pursuit of a valuable artefact, a jewel encrusted statue of a bird - "The Maltese Falcon." 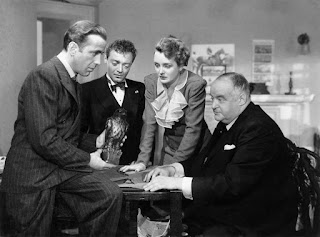 3) Bogart, Lorre, Astor, Greenstreet and the Maltese Falcon
The Maltese Falcon is an excellent example of the term and technique used in films called the "MacGuffin". Made popular by Alfred Hitchcock, the Macguffin is usually an ambiguous object used to drive the plot... in this case, The Maltese Falcon. Huston recognised this and realised Hammett's novel was a character piece and not a plot driven story. At the time of release, Variety magazine describes The Maltese Falcon as "a most intriguing and entertaining murder mystery, picture displays outstanding excellence in writing, direction, acting and editing--combining in overall as a prize package of entertainment for widest audience appeal." (Variety. 1941). Huston's unique style and direction combined with Bogart's tough, mean representation of Spade cement The Maltese Falcon as a timeless classic and the prototypical film noir.