Behind the Mask: The Rise of Leslie Vernon - review

Behind the Mask: The Rise of Leslie Vernon - 2006
Director - Scott Glosserman 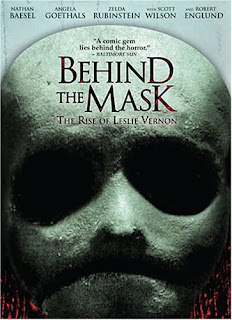 1) Behind the Mask: The Rise of Leslie Vernon - poster
Plot Summary / review:
"Behind the Mask: The Rise of Leslie Vernon" is Director Scott Glosserman's attempt to capitalise on popular meta-horror franchises such as Wes Craven's "Scream"; Daniel Myrick and Eduardo Sanchez's "Blair Witch Project and Oren Peli's "Paranormal Activity".
Its "mock-umentary" approach follows Nathan Beasel as an enthusiastic wannabe serial killer, Leslie Vernon. Leslie, (a cross between Jim Carrey and Matt Dillon's "Pat Healy" from "There's Something about Mary"), allows determined film student Taylor Gentry (Angela Goethals) to document his rise to fame. He "invents his own mythos -- a backstory involving a purportedly drowned youngster -- while scoping out potential victims among the teen population of his small town." (Variety. 2007). 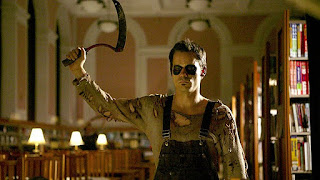 2) Nathan Beasel as Leslie Vernon
Glosserman is obviously a fan of meta-horror / comedy genre's, cutely paying homage to other films of its genre. He references every popular killer from Michael Myers to Freddy Kruegar and even casts Robert " A Nightmare on Elm Street" Englund in a small cameo role. However, as Bill Stamets of Cicago Sun-Times reviews, Glossermans script and directing "can't match the wit of Scream" or "the fright of The Blair Witch Project". (Stamets. 2007). 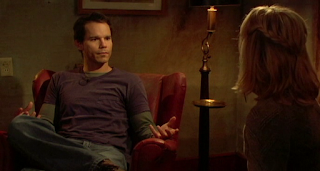 3) Gentry interviewing Leslie
"Behind the Mask" is ultimately let down by poor acting and an obviously low budget. The synopsis is an example of an excellent idea, badly executed. Its biggest flaw occurs when the action moves away from the gritty, handheld camera to traditional horror movie camera work. This breaks the audiences illusion of witnessing a real life psycho path plotting his murderous spree. Glosserman is "desperately overcompensating for the fact that most horror films are already parodies of themselves, Behind the Mask takes a bite out of the dumb Scream franchise before devouring its own tail, proving that you are what you eat." (Gonzalez. 2007).