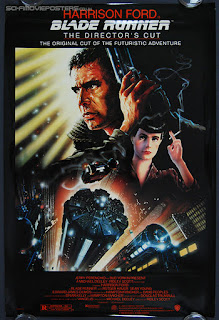 1) Blade Runner: The Director's Cut poster
Plot Summary / review:
Ridley Scotts' seminal "Blade Runner" pays homage to 1940's film noir. Although set in the future and filmed in colour, it encompasses all of the classic elements of film noir. It's visual style uses strong directional lighting and deep shadows, setting the tone. It is set in a futuristic L.A. with huge skyscrapers plastered with neon lights, huge billboards and surrounded by smog. Janet Maslin of the New York Times comments; "The special effects are by Douglas Trumbull, Richard Yuricich and David Dryer, and they are superb. So is Laurence G. Paull's production design." She goes on to say " 'Blade Runner' is a film that special effects could have easily run away with, and run away with it they have." (Maslin. 1982). 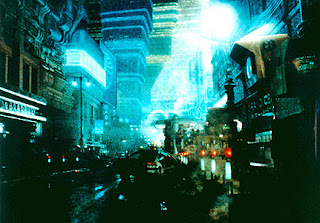 2) Pre CGI
The plot and characters also follow the film noir "code" set by films such as John Huston's "The Maltese Falcon" (1942) and Orson Welles' "Citizen Kane" (1941). Harrison Ford stars as Rick Deckard, a hard boiled, retired "Blade Runner". A highly skilled hunter, whose job it is to track and eliminate "replicants", sophisticated robots built as slaves to work on dangerous off world colonies. Five of which, (including Rutger Hauer's menacing Batty), have escaped back to Earth on a murderous spree, forcing Deckard out of retirement. 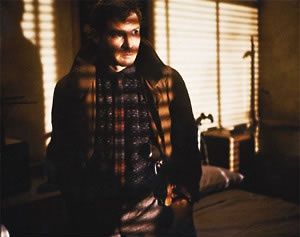 3) Harrison Ford as Deckard
Under pressure from studio executives, Scott's original cut of "Blade Runner" had a curious voice over and a flat "happy ending". What would be the first in a number of re-released versions of the film, Scott's Director's Cut thankfully amends this. Roger Ebert of the Chicago Sun-Times explains "The biggest change Scott made in earlier versions was to drop the voice-over narration from the 1982 original. Spoken by Ford, channeling Philip Marlowe, it explained things on behalf of a studio nervous that we wouldn't understand the film. Since much of the interest in the film has been generated by what we weren't sure we understood, that turned out to be no problem." (Ebert. 2007). The uncertainty Ebert refers to describes the doubt surrounding who is human, and who is not. Based on Philip K. Dicks novel "Do androids dream of electric sheep's?", the Director's cut wisely abandon's the happy ending. Instead the audience is left with a tantalizing question, is Deckard human, or a replicant?
No matter what version of "Blade Runner" is viewed it "impresses with its inquiry into the nature of memory, identity, and what it means to be human. The characters, behind their damaged and defensive facades, are complex and well realised." (Cramp. 2001). Combined with a stunningly realised vision of a bleak future and layered with multiple homages to 1940's film noir, "Blade Runner" rightfully takes it place as one of the best sci-fi films ever made.