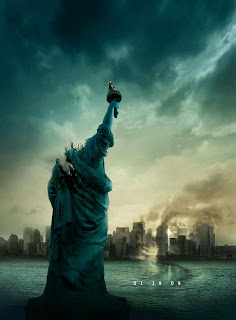 1) Cloverfield poster
Plot summary / review:
Cloverfield opens in a similar fashion to 1998's "The Blair Witch Project" with a chilling message, stating that the following footage was recovered from an SD card found at the site formerly known as Central Park. It then cuts to the protagonist Rob Hawkins (Michael Stahl-David) using his video camera, filming the morning after spending the night with his love interest Beth (Odette Yustman).
The Director Matt Reeves intelligently uses the fractured recording as flashbacks to set the scene and gradually fill in the back story of Rob and Beth. The footage then cuts to several months after Rob and Beth's morning, the camera now in the hands of Rob's brother, Jason (Mike Vogel). He is on the way to Rob's apartment in Lower Manhattan with his girlfriend Lily (Jessica Lucas), who has arranged a surprise leaving party for Rob, who is jetting off to a new job in Japan. 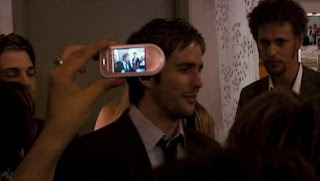 2) Rob's leaving do
Jason off loads his responsibility to film Rob's farewell messages to 'Hud' (T.J Miller), their mutual, dorky friend who reluctantly obliges. Throughout the course of the evening, we discover that Rob has been in love with Beth since college and the night they shared with each other was a secret. This is revealed when Beth arrives with her date Travis. Beth leaves with shortly after a confrontation with Rob.
Apart from unsuccessfully pursuing Marlena Diamond (Lizzy Caplan), Hud spreads the gossip of Rob and Beth between the guests. Rob consoles with Jason and Hud when the building is rocked by an apparent earthquake. They all rush up to the roof of the building for a better view. Whilst they are up there, the New York sky line is lit up by an explosion. 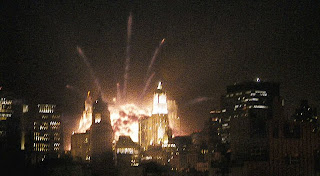 3) Explosion
They all rush down the stairs as a flurry of debris crashes around them. They go out into the street, bewildered. As they ponder what has just occurred, the head of the Statue of Liberty is launched down the street, smashing into buildings, eventually screeching to a stand still. As they turn back, a building collapses and we catch a glimpse of a huge creature moving through the dust cloud. They take cover in a shop as the street fills with plooms of dust and the ground shakes from 'something' stomping passed them. The Director bravely replicates scenes of September 11th of people wondering through the smog, dazed and confused. This iconic imagery blended with handheld camera point of view makes it frighteningly real and disturbing. "Is this attack so terrifying because it has obvious shades of 9/11 or because the handheld camerawork leaves us disoriented, glimpsing the enormous creature only when Hud’s view quivers that way? It’s both. We live in a time when global violence is recorded not by professionals, but by shaky-handed bystanders with camera phones." (Richards, 2008). 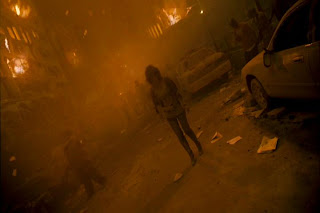 4) 9/11 imagery
Rob, Jason, Lily, Hud and Marlene gather together and join the crowds of people trying to evacuate the island. They unsuccessfully try to cross the Brooklyn bridge when it is smashed by the tail of the monster and Jason is killed. Rob has a voicemail from Beth, crying in pain apparently trapped in her apartment. Rob decides that he must save her. It is here that any similarities with "The Blair Witch Project" end, the remaining group join Rob and try to reach Beth. The visual effects budget flexes it's muscle as they get caught between the army battling with the monster and the parasites, (dog sized, crab like creatures) which drop from the monster and also attack humans.
They reach and save Beth from her apartment which has collapsed and is leaning against the adjacent building, (another Twin Towers reference) after losing Marlene to one of the parasites. They are told by an army official that the last transport leaves at 0600hrs, after that the army will bomb the entire island to tr and destroy it. They arrive in the nick of time but Lily is separated from Hud, Rob and Beth who get a different chopper. Hud continues to film the action as stealth bombers blast the creature, seemingly defeating it. However, the creature jumps from the flaming wreckage and knocks their chopper to the ground. They crash land in Central Park. As they scurry away from the wreckage, Hud is cornered by the monster. Moving back to traditional monster movies, the creature is expertly, however, unnecessarily revealed. "At long last, a lingering full-on shot of the monster is served up, and it's not a friendly sight. All the same, a strong argument could be made for not showing the creature at all. The film's initial hints at offering a new kind of horror eventually devolve into something essentially familiar, provoking idle thoughts that, in the vein of the '50s sci-fier "Forbidden Planet," it could have been more effective with an invisible but quite tangible threat." (McCarthy, 2008). 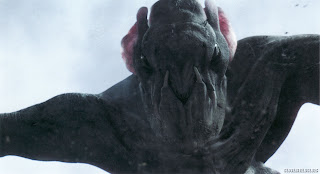 5) Monster reveal
Rob manages to retrieve the dropped camera escaping with Beth, hiding under a bridge in the park. He films his final words and declares his love for Beth. He urges her to do the same, as she films her speech they are engulfed by an explosion. The camera eloquently cuts back to their day together before the events unfolded. 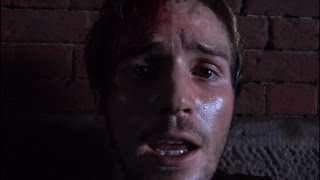 6) Rob and Beth's final moments
Director Matt Reeves and Producer J.J. Abrahams used viral marketing to great effect to market the film. For a long time into post production, the film remained as an 'untitled project' as they released the tantalizing teaser trailer (the iconic Statue of Liberty head scene). It created a huge amount of buzz on the internet, generating alot of questions which ironically aren't answered by the end credits of the film. "...the Paramount release will be lapped up by thrill-seeking young auds everywhere for monstrous initial biz, spurred by an Internet-driven campaign that's been stoking fan interest for months." (McCarthy, 2008).
Cloverfield knowingly takes elements from "The Blair Witch Project", (the hand held point of view, the uncut, unedited style, the characters development and relationship arc through a frightening chain of events), but puts a new spin on it by seamlessly blending it with all the bells and whistles of a special effects film. The only respite from the action is ingeniously interspersed with Rob and Beth's secretive romantic day out which helps flush out the back story. "...all in all, it is an effective film, deploying its special effects well and never breaking the illusion that it is all happening as we see it." (Ebert, 2008).
Bibliography
Ebert, Roger. Chicago Sun Times review. 17th January 2008
http://rogerebert.suntimes.com/apps/pbcs.dll/article?AID=/20080117/REVIEWS/801170302
McCarthy, Todd. Variety review 16th January 2008
http://www.variety.com/review/VE1117935799?refcatid=31
Richards, Olly. Empire Magazine review 22nd January 2008
http://www.empireonline.com/reviews/reviewcomplete.asp?FID=135091
Illustrations
1) Cloverfield Poster http://www.impawards.com/2008/posters/cloverfield.jpg&imgrefurl Accessed 23/02/11
2) Rob leaving do http://www.dailyraider.com/film/cloverfield/decadence.png Accessed 23/02/11
3) Explosion http://farm3.static.flickr.com/2241/2465431745_ebc3f8d3e1_z.jpg?zz=1 Accessed 23/02/11
4) 9/11 Imagery http://www.dvdverdict.com/images/reviewpics/cloverfield01.jpg Accessed 23/02/11
5) Monster reveal http://api.ning.com/files/1Sf**MukX4yW0JfWw8bKLf1Meo8mVjY63m2AhZKjIxCtA19BPbu0G9eNsKN1-lpCPT8LjyTlqOapbC-Uukf4fxD4NYBq2F9V/Untitled32.jpg Accessed 23/02/11
6) Rob and Beths final moments http://shocktillyoudrop.com/nextraimages/cloverfield-alt-end-1.jpg Accessed 23/02/11
Posted by Paul Lavey at 01:37