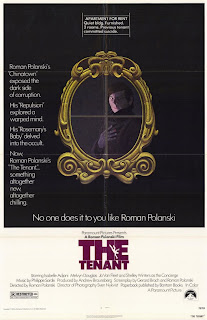 1) The Tenant Movie Poster
Plot Summary / review:
Trelkovsky is somewhat of an introvert and a pushover. A foreigner living in Paris, feeling isolated and disconnected he never complains or sticks up for himself when given horrible hot chocolate to drink or when a beggar hustles him for all of his money. He rents an apartment in a tall, gloomy block of flats, discovering the previous tenant attempted suicide by jumping out of the window. Before he secures the property, he visits the previous Tenant, Simeone, heavily bandaged in hospital and he meets her friend Stella. 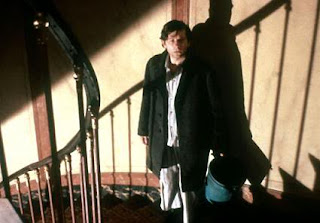 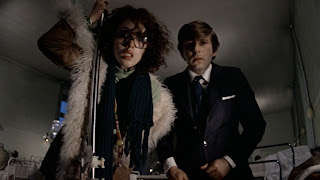 3) Stella and Trelkovsky
Trelkovsky and Stella begin to date and Simeone unfortunately dies, allowing him to move into the apartment. The atmosphere gets more claustrophobic as we meet more of the residents. The Monsieur Zy is unyielding and rude, the Landlord is suspicious and nosy and the other tenants always complain about the slightest of noises. Trelkovsky begins to suspect the residents are plotting against him sending him into paranoia with nightmarish visions. He becomes so erratic, he believes the residents are trying to turn him into Simeone, he finds some of her old clothes and dons a wig and make-up, falling deeper into madness. "That 'The Tenant' works so well is because it's not strictly about madness, though that is its narrative form. It's about emotional isolation that has become physical. The forces that occupy Trelkovsky's mind were invited in by him, the outsider." Canby, 1976. 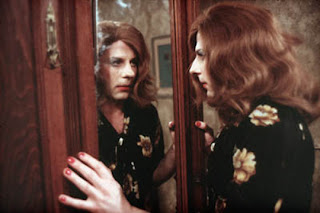 4) Cross dressing
Eventually he succumbs to his own paranoia, throwing himself out of the same window as Simeone, not once, but twice. In an eerie ending, Trelkovsky ends up in the same hospital bed wrapped in similar bandages again. He awakes to find what could be the next tenant, meeting Stella and the whole process starts again. 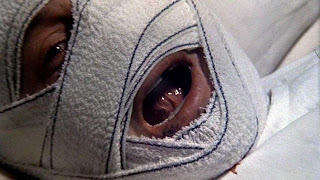 5) End scene
The Tenant is a strange a film, so peculiar it is quite hard to follow, but it does succeed in developing an atmospheric, sinister tone. "Frustratingly, because so much of the film is so odd, little is ever explained. But the macabre tone and eerie appearance (thanks to Ingmar Bergman's cinematographer Sven Nykvist) mark it out as an intriguing depiction of mental breakdown built round a dark comic performance by the director himself." Filmfour, 2003. The Tenant is the third film in Polanski's 'Apartment' trilogy and has similar themes, for example the sinister neighbours from 1968's "Rosemary's Baby" and the gradual breakdown of Carol from 1965's "Repulsion". The film and subject matter (madness / paranoia and isolation) is something obviously deeply resonate to Polanski, possibly the motivation for casting himself as the main character Trelkovsky. "A difference is that Polanski casts himself in the central role, constantly having to deny that he’s a foreigner, suggesting this is an even more personal, painful film." Newman, 2010.
Bibliography
Canby, Vincent. Ne
w York Times Review 21st June 1976