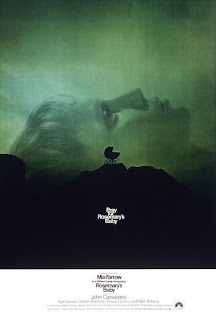 1) Rosemary's Baby Poster
Plot Summary / review:
Guy and Rosemary Woodhouse (John Cassavetes and Mia Farrow) are a young married couple who buy a run down flat in New York with a history of peculiar occurrences. Despite warnings from Edward 'Hutch' Hutchinson a fatherly figure to Rosemary, they move in and make the place their own. 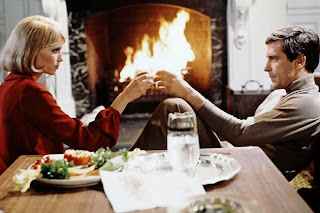 2) The happy couple
As the couple settle into their new home, they meet their strange, nosy neighbours Roman and Minnie Castevet an elderly couple with an over friendly approach to the pair. Rosemary befriends Terry, a reformed drug addict living with the Castevets who seemingly commits suicide shortly after their meeting. 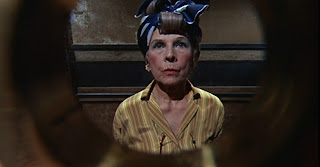 3) Minnie Castevet
Minnie invites Rosemary and Guy to dinner and they reluctantly accept. Guy begins to act suspiciously after the meal and seems to bond with the Castevets after initially being ambiguous about the elderly pair. Guy is a struggling actor and all of a sudden lands a role through another actors misfortune. His attitude changes towards starting a family, even noting the best night to try for a baby.
Minnie takes an unusual interest in the couples affairs, constantly giving Rosemary food she has prepared, drinks to help her conceive and a "lucky" charm filled with a strange smelling herb. Rosemary has a funny turn after eating a chocolate desert made by Minnie and is put to bed by Guy. That night she has a nightmare about being raped by someone or "something" whilst her new residences and her husband look on. She awakes the next day with scratches on her back, when she speaks to Guy, he explained it was the best time to conceive so he tried whilst she was asleep.
Rosemary falls pregnant and she inexplicably loses weight and her health, all the while her husband becomes more erratic at the Castevets keep supplying her with vitamin enriched drinks. She becomes paranoid about everyone, especially after Hutch falls into a mysterious coma after trying to give her information about Witch Craft and it's connection to the people around her.
As Rosemary nears her due date, she confides in her previous Doctor who ultimately betrays her and leads her back to Guy and the residence at her flat. She goes into labour whilst trying to escape and is given anaesthetic, awaking the next day to hear she gave birth to a boy who dies a week after birth. She is kept in bed and drugged but hears the sounds of a baby crying next door. When she investigates, she discovers her neighbours are devil worshippers who Guy made a deal with to enhance his career. They explain that she was chosen by the devil to give birth to the anti-christ who she finds in a black cot with the eyes of her father. 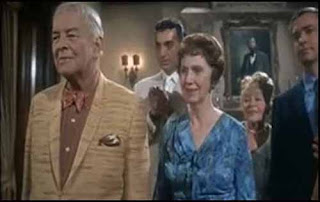 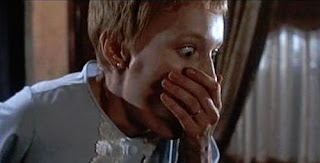 5) Baby Damien
Roman Polanski has made a truly timeless classic which has been emulated and re-imagined in countless other films from The Devils Advocate to The End of Days. The film effortlessly transitions from a taught thriller, hallucinatory nightmares into full blown paranoia and to a truly horrific ending. The pacing of the film is exquisite, gradually building the suspense from the gloomy flat interiors to the suspicious characters and their motives all from Rosemary's perspective. "its main strength comes from Polanski's refusal to simplify matters: ambiguity is constant, in that we are never sure whether Farrow's paranoia about a witches' coven is grounded in reality or a figment of her frustrated imagination. Sexual politics, urban alienation, and a deeply pessimistic view of human interaction permeate the film, directed with a slow, careful build-up of pace and a precise sense of visual composition." (Andrew, Geoff. 2006.) The film has a gritty realism, flooded with familiar characters and could almost play out like a documentary, a snap shot of a block of flats in 1965, with everyday people doing peculiar, horrific things. Ruth Gordon is particularly good as Minnie Castavet, a New York "wise-gal" version of Peggy Mitchell. "Polanski's achievement is in immersing us so completely in Rosemary's point of view that we share her doubts, confusion and suspicions as she becomes increasingly cut off from former friends and begins to believe her husband is in cahoots with the Castavets in a diabolical plan to harm her baby. This is horror rooted not in misty Carpathian castles, but in recognisable modern life, with the Satanists depicted not as outlandish fiends but the sort of everyday folk you might encounter on any urban street." (Billson, Anne. 2010)
Mia Farrow gives an excellent performance, transforming from a loving, supportive house wife into a paranoid wreck as the audience discovers with her the horrible truths. The whole time her character is believable enabling the audience to connect and route for her whilst avoiding the usual tendency for typical "damsel in distress" to become annoying or crass. "Miss Farrow is quite marvelous, pale, suffering, almost constantly on-screen in a difficult role that requires her to be learning for almost two hours what the audience has guessed from the start. One begins to think it is the kind of thing that might really have happened to her, that a rough beast did slouch toward West 72d Street to be born." (Adler, Renata. 1968.)
Bibliography
Adler, Renata. New York Times Rosemary's Baby review 13th June 1968
http://movies.nytimes.com/movie/review?res=EE05E7DF1738E271BC4B52DFB0668383679EDE Accessed 06/12/10
Andrew, Geoff. Time Out Rosemary's Baby review 24th June 2006
http://www.timeout.com/film/reviews/76955/Rosemary-s_Baby.html Accessed 06/12/10
Billson, Anne. The Guardian Rosemary's Baby review 22nd October 2010
http://www.guardian.co.uk/film/2010/oct/22/rosemarys-baby-polanksi-horror Accessed 06/12/10
Illustrations
1) Rosemary's Baby Poster - http://4.bp.blogspot.com/_Z3BUX71Sca8/TLs6qJK-8PI/AAAAAAAALfo/767uRnuoh6o/s1600/rosemarys-baby-movie-poster22.jpg Accessed 06/12/10
2) The happy couple - Rosemary's Baby still - http://static.guim.co.uk/Guardian/film/gallery/2008/aug/12/1/rosemary%27sbaby630-4040.jpg Accessed 06/12/10
3) Minnie Castevet - Rosemary's Baby still - http://www.horrorphile.net/images/rosemarys-baby-ruth-gordon1.jpg Accessed 06/12/10
4) Devil Worshippers - Rosemary's Baby still - http://www.dreadcentral.com/img/news/jun10/10fvhope.jpg Accessed 06/12/10
5) Baby Damian - Rosemary's Baby still - http://images.rottentomatoes.com/images/news/au500-666-rosemary.jpg
Posted by Paul Lavey at 02:10