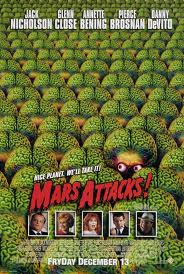 1) Mars Attacks! - Poster
Plot Summary / review:
Tim Burton's Mars Attacks! is a mix of genres combining action / adventure with sci-fi and fantasy with comic references to classic alien B-movies. In order to fully understand what genre the film belongs to, it is necessary to look at the differences between pastiche, parody and spoof.
Pastiche - used when the work or piece imitates that of another, paying homage to the material it is referencing in a respectful manner.
Parody - also imitates the work or piece of other material but in a satiric or ironic manner to mock, comment on or trivialise the material it is referencing.
Spoof - again is used when the work or piece is imitating that of another but with exaggerated characteristics for comedic effect.
So where does Mars Attacks! sit? It is a funny film, with extremely well designed, exaggerated aliens based on old trading cards from which the film gets it's name. This would suggest that it is a spoof. However, it can also be argued that it is a pastiche of classic 1950's alien invasion B-movies. An example of Burton paying homage to these films is evident from the start of the film when the UFO's descend to earth from their home planet. The design of these flying saucers are strikingly similar to Klaatu's saucer from 1951's The Day the Earth Stood Still. Roger Ebert comments "The art direction is first-rate in creating the kinds of saucers and aliens that graced the covers of my precious old issues of Imagination Science Fiction magazine". (Ebert. 1996).

2) Aliens mobilise
The aliens arrive on earth and are greeted by a crowd of people and the US army. In a scene again reminiscent of The Day Earth Stood Still, the crowd await to see if the visitors are hostile or friendly. Unfortunately it is the former and the alien attacks with iconic ray guns and blasters which vaporize humans and tanks alike. Further evidence of Burton paying homage to the 1950's can be seen here. Although set in a contemporary world, the army vehicles and clothes are all from the 1950's. 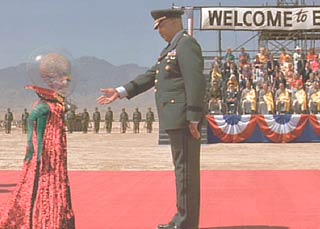 3)1950's attire
Mars Attacks! clearly had a big budget and attracted a host of stars, both established and up-coming. Jack Nicholson stars as the President, Glen Close the First Lady and a young Natalie Portman as their daughter. Pierce Brosnan shows acting range from his established Bond playing a scientific advisor to the President. His strange love triangle with TV personalities Michael J. Fox and Sarah-Jessica Parker add good comic timing to the films bizarre nature. It's the Hollywood A listers that let it down as Tom Coates from the BBC explains 'Nicholson, (Annette) Benning, and Close - camp up their screen time until they are neither funny nor interesting.' (Coates. 2001). The stars of the show are undoubtedly the aliens. Originally intended to be physical puppets, Burton was convinced by ILM (Idustrial Light Magic) when they showed him early test footage of them in CGI. Although they have not aged well, they were cutting edge at the time. 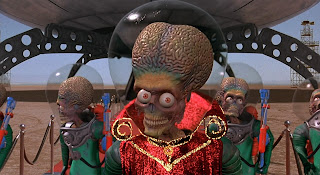 4) CG Aliens
Mars Attacks! is artistically inventive, goofy and fun in some places, however it does suffer from some pacing issues. It often feels disjointed, over-long and in some cases boring and is let down by some established Hollywood actors. Burton is clearly knowledgeable and affectionate about the material he is referencing. However,Todd McCarthy of Variety explains it "will appeal to specialized student-age audiences and older sci-fi fans but will fly over, under and around the general public". (McCarthy. 1996). The movie makes up for this with fantastic artistic direction and zany alien designs. The funniest parts of the movie come when the aliens are attacking and take great sport in doing so.